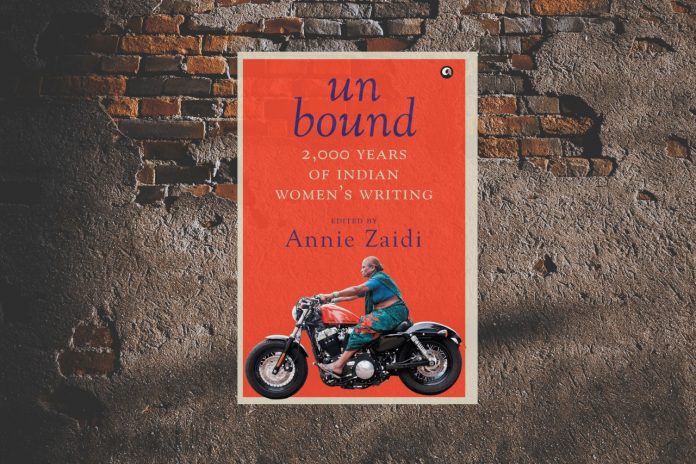 Unbound is an anthology of powerful, distinctive and diverse voices of Indian women writers from every era since Circa 300 BCE. It is a compendium of conscientiously mined gems from a plethora of novels, memoirs, essays, short story collections and volumes of poetry translated into English from several languages across India or have been originally written in English.

The editor Annie Zaidi has undertaken an honest and herculean endeavour to showcase the essence of the spectrum of literature crafted by Indian women writers across diverse eras with wide-ranging linguistic, social, cultural and spiritual influences. The extracts selected by the editor paint a vivid canvas that captures the myriad hues of subjects, themes, styles and genres that are dealt with exceptional creativity by the writers. The excerpts have been classified into thematic sections: Spiritual Love, Secular Love, Marriage, Children, Food, Work, Identity, Battles, Myth & Fable, Journeys and Ends. Each section unfolds with an insightful introduction that takes us into the heart, the very soul of the writing and the writer.

The anthology opens with the theme of Spiritual Love with verses from the Therigatha written by Buddhist nuns. With beautiful ‘brevity, rhythm and orality’ they reveal the trials they faced and their accomplishments along their path towards “Nibbana”. The devotional passion of the saint-poets of the Bhakti movement and the Sangam period is seen in their verses rich with emotional intensity and metaphysical depth. Their writing gives us a rare and unique insight into the social conditions prevailing at that time and the position of woman at home and in society. I must confess that even though I have lived for many decades, my spiritual knowledge is at its infancy. You could imagine my sheer delight when this anthology introduced me to the English translations of many voices from diverse spiritual persuasions.

Critics might say that throughout the anthology, varied voices with different styles of writing and historical significance across centuries are placed side by side in order to fit them into the theme of each section. Rokeya Sakhawat Hossain, K. Saraswathi Amma, Sarojini Naidu, Okkur Macattiyar, Qurratulain Hyder, Temsula Ao, Pinki Virani among other prolific writers were clubbed together. But for the casual reader like me, in the excerpts taken from Sultana’s Dream, Hossain’s way of envisioning a magical Utopian world while eloquently expressing her angst juxtaposed with fiery Saraswathi Amma’s tightly packed arguments and sardonic humour in A World Without Men followed by Sarojini Naidu’s speech Indian Women and the Franchise and Purananuru 279 by Okkur Macattiyar from the Sangam era was nothing short of an amazing experience.

Zaidi has chosen writers with “a definite way of observing the world and remarking upon it.” From the poets of the 6th century BCE to 21st century contemporary authors, freedom in all its manifold forms seems to be the most cherished ideal, especially for the female protagonists they have created. Before they could all peacefully exhale, they had to breathe it all in whether they were caught up in the throes of a historical conflict or internal psychological turmoil, whether they were directly confronting patriarchy and chocking it by yanking on the very chains that shackled them, whether they were achieving goals passive aggressively within the constructs dictated to them at the individual level or subverting social injustices collectively.

Championing quiet rebellion, Rassundari Devi, married at twelve, taught herself to read and eventually wrote her autobiography Amar Jiban in 1876. Vibhavari Shirurkar’s Kharemaster, tells us a story of a man and his very young bride set in the backdrop of time when reformers were fighting for the passage of the Age of Consent Bill. Kharemaster refused to go ahead with the consummation rituals, but he did teach his child-bride the alphabet. She taught him to adjust to her ways about the house. Joya Mitra’s Killing Days opens with her regaining consciousness and realising that she’s lying on the floor of a tarpaulin covered van. She takes us into the conditions of prison and lives of prisoners. Manju Kapur’s Amba Dalmia takes us through her difficult journey after losing her daughter to an unfortunate accident. Her narration is simply beautiful and we feel we’re right there with here.

Inherited stories are retold with a new narrative. Saudamini Devi’s Adbhuta Ramayana is an intriguing version where Sita takes the form of goddess kali and ultimately destroys the abductor herself. In Pratibha Ray’s Yajnaseni, the Story of Draupadi is expressed from Draupadi’s point of view. The play Viswamitra by Kumudini is a humorous retelling of the legend of Raja Harischandra where his wife doesn’t want to quietly follow him into exile.

The words of Mahasweta Devi, P. Sivakami, Sarah Joseph, K. R. Meera, Bama, Salma, Vaidehi and many more voices in this book have accompanied me to many places. This anthology’s charm lies in the way it has been put together. I could easily slip into the pages with an “Aha” moment here and an epiphany there. And slip out just as easily to have a meaningful discussion with the other mothers while waiting for our daughters at dance rehearsals. In the waiting room during my Dad’s surgery while reading the excerpt from Bama’s Chilli Powder with my mother, the lady next to her managed a chuckle through her snot-crusted, teary face. That’s when my mother realised that she was reading it aloud.

Annie Zaidi reveals in the introduction that as soon as she began to feel a kinship with the book that she had read, she’d write her name on the first page. I have inscribed my name in your book, Annie Zaidi. I think I’ll never be done with reading into this book. For in it I see my daughter’s writing. Unbound is a wondrous jigsaw puzzle pieced together to form an insightful mosaic of experiences across time that hold a mirror to ourselves and echoes our collective Indian female consciousnesses and ethos.

1 ARTICLES PUBLISHED
Aparna Ravikumar is currently loving and living it up in Bengaluru transcribing her thoughts onto paper with a lilt influenced by a glorious childhood spent in Zambia, adventures while acquiring a Masters in Mass Communication & Journalism in Chennai and experiencing life across the West Coast and Midwest America. 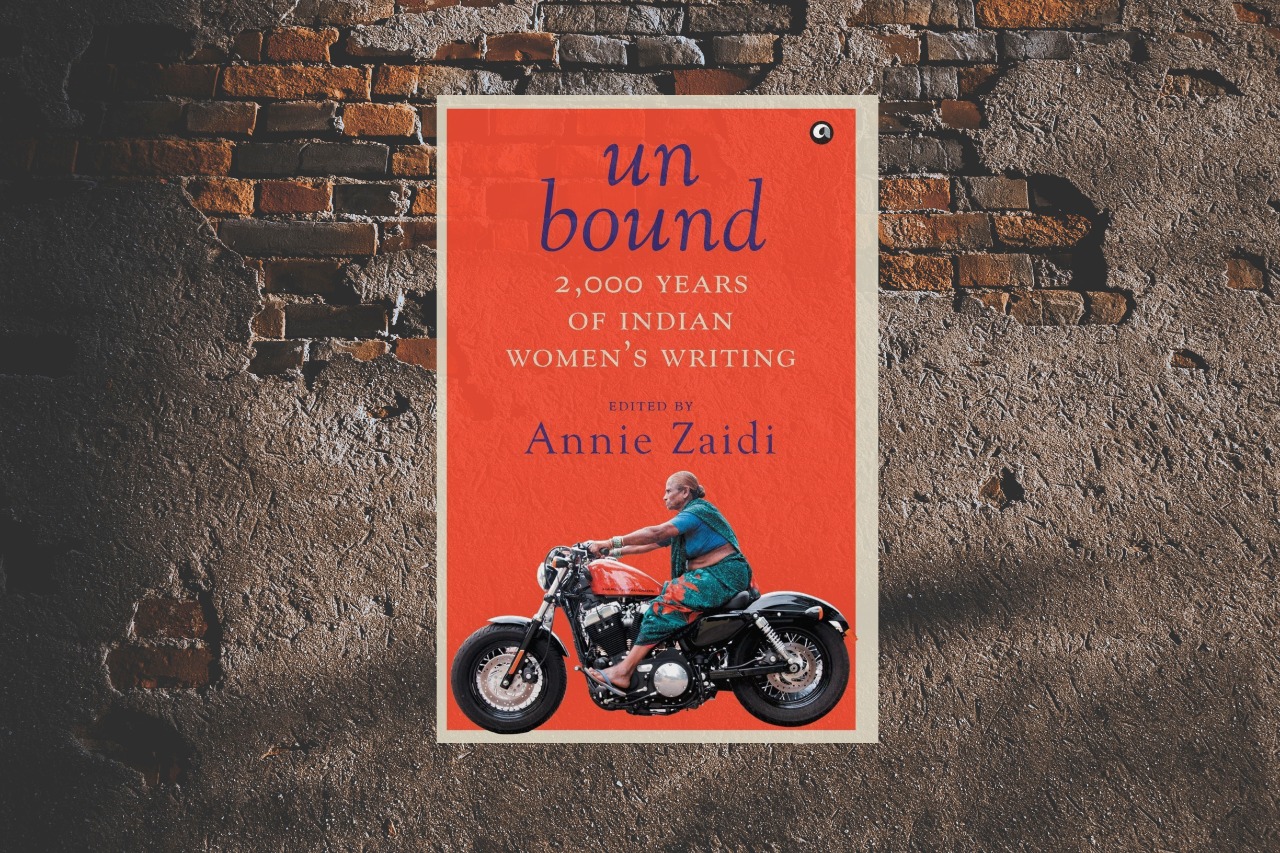